After a severe ice storm struck Missouri and surrounding states at the end of January 2002, seven tub grinders – six of them HogZillas – were positioned at Kansas City’s Arrowhead Stadium to process the storm debris.

“We ground more than three million yards of mulch in about four months,” recalled Jason Anderson, of Missouri Organic Recycling, which coordinated the effort. “It was a spectacle. The NFL had to give us permission to do it. We had truck after truck after truck bringing brush in there and we were responsible to grind and process it, and then also make sure that material went to a good end use.”

At that time, Missouri Organic owned a single tub grinder and had to recruit other companies to help with the massive job.

“We contacted a couple local people, then called HogZilla (based in Sabetha, Kan. – about 120 miles away) and asked who all owned their grinders,” Anderson said. “They were a big help. People came from as far away as Texas. They were willing to pack up and make the trip because they knew they would be busy grinding for a while.”

“When we bought our first HogZilla in 2000 we were a lot smaller company and the people at HogZilla thought we’d only run it a couple days a week,” Anderson said. “It turned out that we needed it for daily usage, but it’s still going strong with probably about 23,000 hours on it. We grew so much that we had to add a second machine – a used HogZilla – in 2018, and now we hired them to build us our brand new tracked machine.” 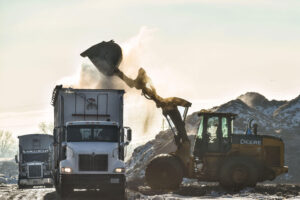 Missouri Organic, based in Kansas City, operates a main composting yard and a mulching facility, along with four satellite yards with drop-off sites. The company transports its tub grinders to its satellite yards where they do a coarse, primary grind of all of the material on-site before it is hauled in walking floor trucks to its main mulch and composting sites.

“Everything that comes into the drop-off sites, whether it’s big chunks of wood or leafy, grassy or brushy material, goes through the tub grinder,” Anderson said. “The tub grinder is the start of the process. Without the tub grinder, we don’t have compost.”

Ground woody material is routed to the mulching facility, where it is double ground through a Peterson 5710D horizontal grinder.

“If I’m selling it to a bagging company or for my own mulch that I sell, I will typically grind it once through the tub grinder, then I’ll grind it the second time through the horizontal, which shoots it right onto a (BM&M) twin screen deck that screens the one-inch to 3/8-inch material. We then color it red, brown or black or sell it as a natural mulch that we call our Premium 1 mulch,” Anderson said. “We also sell a lot of double-ground mulch that we grind through the tubs with smaller screens.”

Fines under 3/8-inch are used as bulking agents for compost production.

Likewise, brushier material at the drop-off sites is ground and taken to the company’s composting facility where it is used as a bulking agent and mixed with food waste to make compost products.

Along with about 300,000 cubic yards of mulch annually, Missouri Organic sells about 60,000 yards of straight compost and about 25,000 yards of soil mixes that contain compost – like garden soil and raised bed mix. The company also is an authorized blender for Rooflite green roof media products.

When the time came to add a third tub grinder, Missouri Organic decided on the HogZilla tracked machine to supplement its two wheeled machines.

“We don’t do much land clearing, so hauling our wheeled machines to our own sites – and some other municipal drop-off sites that we handle – has worked fine for us,” Anderson said. “But we decided that the tracked version would make it easier for cleanup. What we’ve found is that material builds up around these grinders and makes it harder to move them. If I hook my truck up to move a grinder after a full day of grinding, there are logs that have gotten underneath the grinder and mulch and debris builds up in front of the tires. So, to move them and pull them forward can damage your truck. Putting the machine on tracks takes care of that issue.”

Anderson said the company’s nearby location was a big factor in choosing its first HogZilla tub grinder, but Missouri Organic also has become sold on HogZilla’s durability. 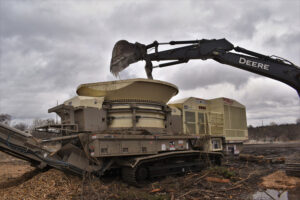 “HogZilla is two hours away, and we like to be close to our support,” he said. “If I need a part, or if I’m down and can’t figure something out, those guys will get in a truck and will be here in two hours and have me up and running within hours. Their service is amazing. But then on top of that, these grinders are built stronger than anything else in the market.”

“It wasn’t built as strong,” he said. “We wore it out. We don’t expect to have that issue with our HogZilla grinders.”

Dave Anderson, Jason’s father, founded Missouri Organics in 1992 after Missouri banned yard waste from landfill disposal. The company now has 83 employees – many of whom are family members.

“It started with my dad and me and my brother, Kevin,” Anderson said. “I have uncles, aunts, cousins, nephews, in-laws and friends from high school working here. We now have our third generation working here, who will hopefully be taking over the business in the future.”

Dave Anderson, Jason said, was a chimney sweep who started the company so he could sell firewood to his clients.

“From there we started to take in yard waste to make compost and mulch,” he said. “We provided an outlet for people to dump their yard waste, but we also developed good quality products to close the loop. People not only can dump their stuff with us, but they also want to buy materials back from us.”

“We have food waste collection routes,” he said. “We take packaged food waste from grocery stores like Walmart and Kroger.”

Packaged organics are extracted with a Tiger depackaging machine. The emptied packages are sent to a waste-to-energy plant that provides heat to a cement factory. About 1,200 gallons of organic waste are mixed with about 35 yards of yard waste and placed in windrows on the company’s 20 acre composting site.

Along with the compost and mulch business, the on-site Urban Lumber Co., recovers usable wood to create custom tables and other products.

“My grinder crews are trained, if they see a unique species or a log that’s 15 inches in diameter by six foot long, to throw it aside so my sawmill guys can decide whether they want it or not,” Anderson said. “If they do, it’s transferred down to our sawmill. They make a rough cut lumber or you can hire them to make you a finished conference table or a countertop or anything like that.”

With the purchase of its third HogZilla tub grinder, Anderson said Missouri Organic is poised for further growth. 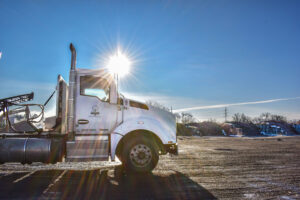 “Our goal is to take care of all the yard waste in this region,” he said. “We have contracts with Kansas City and other cities. If there is ice storm or tornado or any kind of tree damage, I’m responsible to take care of that material. So things like that are what we have to prepare for and we need to make sure that we have our equipment ready and available in case something like that happens. Because it’s the first step in everything we do, our grinder needs to be up and running every day with as few breakdowns as possible. We know that we can rely on the HogZilla grinders. They are heavy duty and are built to last longer than anything we’ve seen out there. ”

The HogZilla 1462T tub grinder with a standard Cat 1,050 HP engine, is designed to maximize transportability while offering production rates of 100 to 150 tons of yard waste, 50 to 100 tons of stumps and logs and 35 to 120 tons of pallets and construction waste per hour. You can get more information at hogzilla.com. You can learn more about Missouri Organic Recycling at missouriorganic.com

Be the first to comment on "Equipment Feature: Growing Missouri Organic adds its third tub grinder"