KFC Canada has announced that all of its consumer packaging will be “fully home compostable” by 2025. Although the announcement may be well-intentioned, failure to live up to that claim could damage the commercial composting industry, said Susan Antler, executive director of the Compost Council of Canada (CCC).

No claim for home compostability would clear the availability threshold for the levels required by environmental labeling guidelines, Antler said.

“Consumer confusion about these terms (like ‘compostable’) sound good, but they have a huge impact – mostly negative – on the work that our organic processing facilities address,” she said. “Home composting is the gold standard. It’s the only form of recycling that somebody can do from start to finish by himself. The whole industry benefits from the respect that happens when organics are put into a home compost unit, because people understand what materials go in. They understand the process. They see the value of the product that comes out. They see what it does for their soil in terms of the improvements. There’s a huge trust there. It isn’t a mini landfill in a backyard, so don’t treat it as such in terms of the input.”

“There was no reach out to our industry,” Antler said. “We tried to approach them and identified our calls as urgent, but the phone calls have not been returned.”

As of the time this article was posted, KCF Canada also has not returned a call from Composting News. 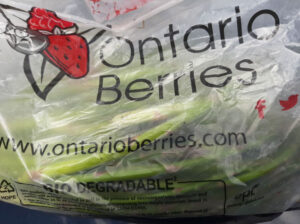 Asked whether she doubts KFC’s claims about backyard compostability, Antler said, “We don’t know. Anyone who backyard composts knows that neither meat nor grease should be placed in a backyard bin. So what are people going to do with chicken bones when they put the (KFC) packaging in their compost pile?”

Antler noted that there are no standards for home composting in Canada, and claims like ‘compostable’ on food service packaging are likely to confuse consumers.

“Ultimately, our facilities are in the business of producing products back to the soil, and it’s important that the inputs to their facility are of the highest quality possible and do no harm to the manufacturing work that’s happening in the facility to allow them to produce the product that is quality,” she said. “Homeowners are trying their best, but composting isn’t their full-time job. They don’t understand the implications of these phrases that sound so good. The true test is compost that is certified through a certification program.”

KFC Canada said last month that all of its consumer-facing packaging will be fully home compostable by 2025. The fried chicken chain said it will be the first quick service restaurant in Canada to take the step.

“One of our leading principles at KFC Canada is feeding people, not landfills,” said Nivera Wallani, president and general manager, KFC Canada. “The move to 100 percent home compostable consumer packaging is a bold and ambitious step we are taking to inspire positive change in the communities we operate in. We embrace our responsibility to drive meaningful change across the industry and work closely with our suppliers, franchisees and team members to continuously lessen KFC’s environmental footprint.”

The company said select restaurants began testing a new fiber-based ‘spork’, made from bamboo, corn and sugarcane in November 2020. The new cutlery naturally decomposes at room temperature and requires no additional treatment, nor does it leave any toxic by-products, KFC Canada said, adding that the process takes about 18 months to decompose. Once fully introduced into the KFC restaurant system, the compostable cutlery will eliminate 40 million pieces of plastic cutlery annually.

In 2020, KFC Canada announced that bamboo takeout buckets would become a permanent packaging solution given that the material is fast-growing, anti-bacterial and 100 percent biodegradable. By the end of 2021, KFC will have removed 12 million plastic poutine containers from its operations by transitioning to bamboo.

“Our packaging is a part of our heritage and our storytelling. Beyond its iconic image, we want KFC’s packaging to be forward-thinking, inspiring, and to champion functionality, food safety and eco-friendly solutions,” said Armando Carrillo, innovation manager, KFC Canada. “We have continued to accelerate our efforts and push the boundaries to bring more environmentally sustainable packaging solutions to market, including our recent move to bamboo poutine buckets. A fully home compostable packaging line is the ultimate win for us and for the environment.”

To celebrate its new commitment, KFC Canada is partnering with Toronto-based artist Briony Douglas to design and create a KFC bucket installation made entirely out of home compostable materials.

Antler said CCC is frustrated by an approach by the Council of Canadian Ministers of the Environment (CCME) to “create a lexicon/definitions for various environmental/recycling claims,” of which she has seen a recent draft.

As of the time this article was posted, CCME did not return a call from Composting News.

“We believe that the CCME is a highly credible organization which holds great weight (credibility/legitimacy) within the marketplace,” she wrote in an email to CCC members. “The very act of including a word/phrase within the CCME document gives it credibility. If the word is recognized by the CCME, it must be legitimate. It must be worthy of being respected. We have expressed our concern to both the federal and provincial/territorial governments about the confusion in the marketplace and the deleterious impact that claims (and products) such as “oxodegradable,” “degradable” and “biodegradable” cause our organics recycling work. Each phrase seems pretty innocuous/neutral. And yet each of these phrases and the related products cause severe damage to the quality manufacturing work that our organics recycling facilities strive to achieve to create valuable products destined for the health and well-being of our soils.”

As an example, Antler shared a photo of a “biodegradable” bag being used in her neighborhood’s farmers’ market.

“I know that the farmer has deliberately purchased these bags, believing that this is more environmentally positive than traditional plastic,” she wrote. “And yet, I don’t believe that he would have done so if he understood that this material fragments into shards of plastic that will be scattered in the soil.”